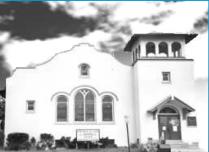 In 1970 the cry for a church in the city of Rochester was made in the State Convention by Bishop E.I. Jones, responding to the call of Sister Josephine Nicholson.

The call went unanswered until 1971 when Brother and Sister John C Breedy heeded a second call that was made. The work was started in November 1972 in a small store front building.

In 1973, a search was made for better accommodations. Unfortunately, within months after the new building was found, it was destroyed by fire. Saddened but not defeated, Brother Breedy again relocated putting his own personal time and  resources into the work.

Following a week of revival, hosted by a representative from the General Headquarters, in March of 1974-the church was organized with only six members. God blessed and the church continued to grow.

Brother Emanuel Humes was appointed Pastor in 1977 and he served until 1979. Brother Humes's leadership could be summed up as "strictly business". He relocated the church to 210 Pennsylvania Avenue, using his own income to purchase the building.

Under the leadership of Pastor Earl McKay from 180-1981, the church grew in fulfilling his vision of becoming an integral part of the community by showing God's love through giving and sharing.

Pastor Marion Richey served from 1982-1985. He and his wife worked very hard in the church while maintaining full-time jobs. They held almost all the offices in the church. Nothing could stop the "G-Team" (God's Team).

In 1985-95 Pastor and Sister Bruce Veit served as Pastor. Pastor Veit served as pastor, preacher and teacher. Under their ministry the church continued to grow and strengthen. His endeavor was to take the church to the next level.  He served as the catalyst of integration with other churches. Pastor Veit also made many improvements and modifications to the church building, making it as comfortable as possible.

In 1995, the church was blessed with the appointment of Pastor Orville and Deana Beckford. Through Orville's vision in 1997 the church acquired their current building at 1074 Portland Avenue. Pastor Beckford was a scholar of the Word and brought true meaning to the scripture "Study to show thyself approved of God".

Bishop Beckford's vision of spiritual and educational development led to the addition of "Higher Ground" to the name of the church. He believes that "nothing is too hard for God". He encouraged members to launch out into the deep experience of God in a greater dimension. Under the Beckford's ministry the membership tripled and the church's goal of diversity was realized.

In August 2011, Higher Ground Church of God of Prophecy experienced another transition. A change in leadership was made resulting in the installation of Pastor Reuben and Sister Almaira Hans. Pastor and Sister Hans are full of energy and have a heart to reach the lost at any cost. Pastor Hans has a passion for spiritual maturity in the things of Christ and for the church to experience growth both internally and externally.